As I roll the wheat berries around on a large sheet, I think about the way the church engages our senses. We were created to experience life on so many levels, sight, sound, taste, touch, smell - and I am always thankful for the way the Orthodox Church recognizes our need for all of these to be a part of worship. Five years ago, on Bright Tuesday (April 14) my beloved grandmother left us. She had been in and out of the hospital since January, and at times we were under the impression everything was fine. Then, a few weeks into Lent she took a turn for the worse. I was about 20 weeks pregnant with my third child, and much of Lent was consumed with visits to the hospital to see Grandma. She was my only surviving grandparent, my father's parents both died before I was born, and my maternal grandfather died when I was 8 from a painful battle with lung cancer. Grandma had always been there though, and she doted on her great-grandchildren - my two oldest - 3 and 5 at the time. We got through Pascha, and were saddened that she was not able to join us for services. I remember Agape Vespers thinking - I should go to the hospital, but we were so exhuasted, and she wouldn't know we were there (at least that is what everyone told me). I planned to go see her Tuesday, but the princess had gymnastics, and I just honestly forgot. Halfway through class I received the call from my husband - her battle was over, she was gone, and I had forgotten to go see her that morning. I grabbed my 3 year old out of class, buckled her into the car, and with tears running down my face hurriedly explained that great-grandma had died. My sweet precious girl looked at me and said, but mommy, why are you crying, Christ is risen from the dead, and then she sang at the top of her lungs "Christ is Risen from the Dead" as I drove home to meet my husband and get to the hospital. It was the middle of April, but it snowed that day - it snowed the entire drive home, and my sweet girl sang all the way. 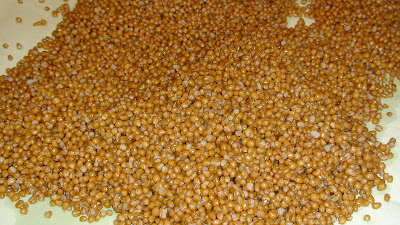 If you have ever experienced a Bright Week funeral, you will understand when I say, the most beautiful death is to die during Bright Week. That night when we received her body at the church, the air was heavy with the fragrance of lilies. The church was still filled with beautiful flowers, and the funeral vigil recalled the vigil held just a few nights earlier for Christ. It is the only time of year when we sing the hymn Christ is risen at a funeral. There is an air of joy and anticipation that no other season allows. The scent still makes me think of her, the sound of Christ is Risen being sung, the feel of wheat berries rolled under my hand, the jewelled beauty of pomegranate purchased in season and then frozen for this special day, and the sight of purple flowers - her favorite. So, in honor of our beloved Joanna, so new to the Orthodox faith, so beloved of her church, so missed by her family - Memory Eternal. 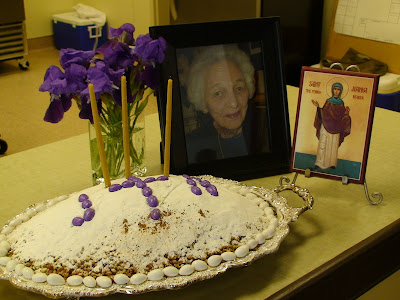 Fr. Roman says the best death is to die on Pascha. And many monastics long for that. I think dying in Bright Week is just about as good.

this made me cry-thank you for sharing that beautiful story!

Thank you for sharing that, I miss her so much too. That was a most vivid day. I spent the night at the hospital all the night before, and left to shower that morning and was to return immediately. She died while I was gone. Driving through the snow, with tears running down my face, I thought of the children I hoped to have that she wouldn't get to meet. Your little ones were so precious to her. Memory eternal.

May her memory be eternal!

I did it again. That first comment was from me, not from my husband!