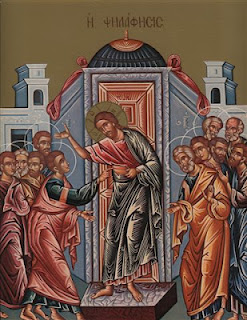 I love this particular Sunday of the year.  It was 13 years ago on this Sunday that my husband and I were "discussing" possible names for our first child who was due in 2 weeks.  We didn't know if we were having a girl or a boy (gotta have a few surprises in life, right!), and we were going round in circles over possible boy names.  We had settled on one we both could agree on as a first name.  It was the middle name that was giving us trouble.  I wanted to use my husband's middle name.  He wanted Thomas.  Why?  Why would you want to name your child after the apostle who is best known for his lack of faith?  There was no family connection with that name.  I didn't understand.  I didn't want it.  And that Sunday morning, as I sat in church listening to our priest offer up a beautiful homily on St. Thomas as a role model, my husband gently nudged me in the arm, more than once.  After church, he just looked at me.  But I wasn't convinced.  That night, about 11pm, I woke with a knife pain in my back, the beginning of back labor.  My contractions started at 7 minutes apart, and my water broke 2 hours later.  We were still "discussing" the name Thomas in the car.  Between pains in my back, I kept saying no.  Guess I was pretty stubborn.  That morning, Monday April 19th, our son arrived.  Our families had all travelled several hours to be there for the appearance of their first grandchild.  One of the first phone calls my husband made was to the priest from the parish where we met.  The priest who married us.  The priest who married my husband's parents.  The priest who along with 6 other men in the 1960's and 70's embarked on a journey to discover the true church of the apostles.  The man who led my in-laws and countless others into the Orthodox faith in the 1980's.  The man Metropolitan PHILIP told, "welcome home", when he and others went to the archdiocese to ask to be received into Orthodoxy.  The man responsible for giving my family the nudge when we were standing at the brink of Orthodoxy but not quite able to step in.  After telling Fr. Gordon Thomas Walker the news of the arrival of our healthy (not so) little boy, my husband leaned over and informed me that our son had been born on Fr. Gordon's birthday. It was at that moment that I gave in, realized Thomas was the name our son was meant to carry.  So, happy birthday and feast day to Fr. Gordon who celebrated his 80th birthday, and happy feast day to my son, who turned 13 on Thursday!  I am officially a mom of a teenager.  I am not sure how I feel about that yet.  But I love the name Thomas.
Posted by Anna at 6:28 PM

Funny how the name (or the saint) sometimes chooses the child, like it or not.

My oldest child turned 13 on 2/13. I'm not sure we are ready for this journey out of childhood and into young adulthood.

Yes, indeed! Sometimes it is not us who chose the name, but the saint who choses to protect our child. I LOVE saint Thomas and I often pray him. My son too has started a new stage in his life: he turned 7 and I just approached it with fear: having to go to confession now and all...

Many years to your son!!! And thank you for sharing this story of his name, it is a blessing!
With love in Christ, Martha