The Face of a Martyr

MOSCOW — The Rev. Daniil Sysoyev, a priest in the Russian Orthodox Church who was known for promoting missionary work among Muslims, was shot and killed in his parish church ... 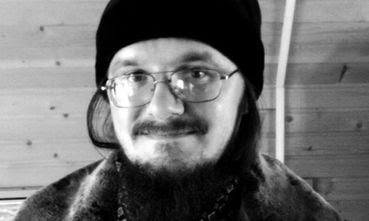 A letter from his wife:
May God Dear brothers and sisters, thank you for your support and prayers. This is the pain which cannot be expressed in words. This is the pain experienced by those who stood at the Cross of the Saviour. This is the joy which cannot be expressed in words, this is the joy experienced by those who came to the empty Tomb.
O death, where is thy sting?
Fr Daniel had already foreseen his death several years before it happened. He had always wanted to be worthy of a martyr's crown. Those who shot him wanted, as usual, to spit in the face of the Church, as once before they spat in the face of Christ. They have not achieved their goal, because it is impossible to spit in the face of the Church. Fr Daniel went up to his Golgotha in the very church which he had built, the church to which he gave up all his time and all his strength. They killed him like the prophet of old – between the temple and the altar and he was indeed found worthy of a martyr's calling. He died for Christ, Whom he served with all his strength.Very often he would say to me that he was frightened of not having enough time, time to do everything. He was in a hurry. Sometimes, as a human-being he exaggerated, he got things wrong, he tripped up and made mistakes, but he made no mistake about the main thing, his life was entirely dedicated to HIM.I did not understand why he was in a hurry. The last three years he was busy serving, never taking days off or taking holidays. I moaned, just now and again I wanted simple happiness, that my husband and my children's father would be with my children and me. But another path had been prepared for him.He used to say that they would kill him. I would ask him who would look after us. Me and the three children. He would answer that he would put us in safe hands. ‘I‘ll give you to the Mother of God. She'll take care of you'.These words were forgotten too soon. He told us which vestments to bury him in. Then I joked that there was no need to speak about that, we still did not know who would bury who. He said that I would bury him. Once our conversation turned to funerals, I don't remember the details but I did say that I had never been to a priest's funeral. And he answered that it did not matter because I would be at his funeral.Now I remember many words which have gained a meaning. Now my doubts have dissolved, the misunderstandings have gone.We did not say goodbye in this life, we did not ask each other forgiveness, we did not embrace one another. It was just another day: in the morning he went to the liturgy and I did not see him again. Why didn't I go to the church that day to meet him? I had thought of it, but I decided I had better get the evening meal ready and put the children to bed. It was because of the children that I did not go there. There was a hand that did not let me go. But the evening before I had gone to the church and met him. I had felt as if dark clouds were gathering over us. And in the last few days I had tried to spend more time with him. Over the last week I had thought only about death and about life after death. I couldn't get my head around either the first or the second. That day my head was spinning with the words: ‘Death is standing right behind you'. The last week everything was so hard, as if a huge load had been emptied out on top of me.I am not broken. He is supporting me, I feel as if he is standing by me. Then we said so many affectionate words, which we had never said to each other in our whole life before. Only now do I understand how much we loved each other.The memorial service for the forty days of Fr Daniel takes place on the eve of his namesday and the patronal feast of the future church, 29 December, and 30 December is the feast of the holy prophet Daniel. According to the prophecy of an elder, the church would be built but Fr Daniel would not serve in it. The second part of the prophecy has already been fulfilled.

I had not heard this. I'm speechless except to say Memory Eternal.

Fr John put an article about Fr Daniel's martyrdom in the bulletin a few weeks ago. Thank you for this letter.

May his memory be eternal. Praying.

May his memory be eternal.