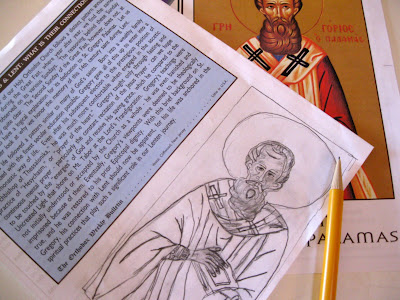 A few weeks ago, the crocodile hunter was complaining about having to learn math and Latin. Like most kids, he started asking why he needed to know either subject. I asked him what he thought he wanted to do when he got older. His responses revolved mostly around paleontology, veterinary medicine and zoology. I calmly explained exactly how Latin and math played a role in each career option he listed. I thought the subject was closed. A week later he came to me. "Mom, I got it. I know what I want to be - an artist. I am pretty sure they don't need to know Latin or math!" So, apparently he has been practicing for his future career as an iconographer - during liturgy no less.

that's one smart kid! good for you for having him learn these things!

You'll have to have him visit the iconography studio at Antiochian Village when we're up there!

So HE'S artist. Fascinating. I thought it was you.

That is impressive! Maybe you do need to encourage him in that direction.

I've been thinking about this post all week. He's not gonna like it, but you might mention that iconographers and artists of all kinds have to use plenty of geometry. And, in an icon my family recently had commissioned of a French saint, the text was all in Latin!!