You will have to forgive the poor photos - I had to switch cameras in order to make these pictures load properly, so quality is not great, but it will give you the idea :) First, let me say, my ideas unfortunately tend to come at the last minute. I will mull an event over in my mind for months (birthday party, wedding, anniversary celebration, whatever) and think I have thought of everything. Then, at the last minute, my favorite ideas come, and I am frantically trying to make them happen. These boxes are a great example. Last year, I got up on Lazarus Saturday and had an idea, for Holy Week items for my kids. When I lamented to my husband that the idea just now hit me, he very calmly stated maybe it was from the devil! Not what I wanted to hear. But, at the same time, his comment had a great deal of wisdom. He pointed out that spending the next few days frantically trying to create these boxes was a distraction, one that would take me away from other more important things I should be doing. So, I listened, and I didn't try to pull it off last year. Instead, I spent the next year slowly collecting the items I wanted and preparing my boxes. I share this in hopes of giving an idea to you, but not distracting you. This is a big project. It may be more than you are interested in. That's okay. It may be too much to manage this year. That's okay. The beauty of the church is we live in a cycle. We get to do it again next year, God willing. So, if my idea inspires you, I thank God. I am sharing because others have so generously shared and inspired me, and if my small contribution inspires someone else then I am thankful.
This project is really a combination of two ideas. Over 10 years ago I purchased a set of "Resurrection eggs", a set of small plastic easter eggs, each one filled with an item pertaining to the story of the crucifixion and resurrection. 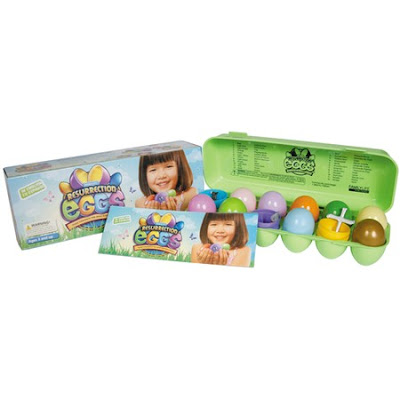 I loved the idea of those eggs, and I also loved the idea of Mary's Dormition boxes, a set of 14 boxes each containing a symbol of the Theotokos to be opened on each day of the Dormition Fast. Those two ideas percolated for a while, and I kept thinking, there has to be a way to make an Orthodox set of Resurrection eggs. Only after weeks of working on the idea did I discover Phyllis Onest has a lovely pamphlet on creating your own set :) Seems I like to reinvent things other people have already thought of! The problem with little plastic eggs though, is it is hard to find items small enough to fit inside, so I took Mary's idea of using the little paper mache boxes from the craft store - conveniently oval shaped, like an egg. 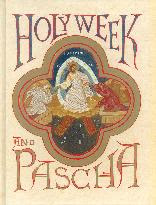 Last year we also purchased this wonderful book for the crocodile hunter, and I read it through. It has a beautiful explanation of each service of Holy Week. The overall themes for each day are laid out, as well as the many rich images we get from the readings during these services. So, using that book, my copy of the Services for Holy Week and Pascha, and a lot of red paint and m*d podge, here is what I came up with: Each box is about 6-7 inches by 4 inches, painted a deep red with an icon attached to the top. Most of the icons were old bulletins I had saved, I just cut and mod podged them on. The ones I did not have as bulletins I located through the OCA website. I painted the inside of each box in gold. Another way to do this on a smaller scale is to just make one box with an icon of the Resurrection on it, and rotate the items out each day. This would make for easier storage too! This project does not have to cost a lot, many of the items are things I found by scrounging through the kids stuff, or my fabric stash. The hardest part was getting enough of the boxes, as our local craft store will not special order these. I had to watch for a while to manage to gather enough (I made a set for a godchild, so I needed 14 :) but, they were very inexpensive, I think I paid $1.25 each because I got them each time they went half price. 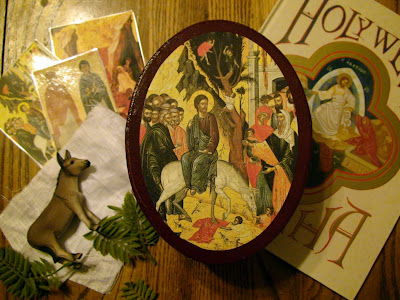 Box 1: This box is for Lazarus Saturday and Palm Sunday. It contains a strip of linen fabric to represent the raising of Lazarus, a donkey (from the crocodile hunter's stash), palm branches (a piece of artificial greenery I found at H*bby L*bby, I just cut the individual fronds off) and icons of Mary and Martha, the Raising of Lazarus, and the Entrance into Jerusalem. I forgot to include them in the photo, but the other item I am putting in this box is the dried palm branches woven into crosses from past years. 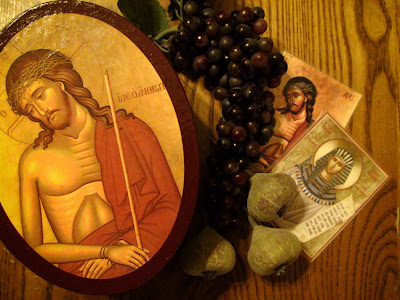 Box 2: This box is for Sunday evening Bridegroom Matins and Monday morning services. The focus of these services is humility, with Joseph as the Old Testament type of Christ, suffering in humility before saving his people. The grapes (from a craft store) and figs are references to the parables told during these services. 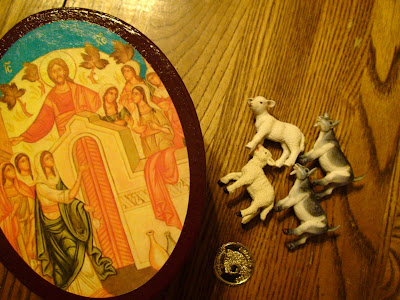 Box 3: This box pertains to Bridegroom Matins on Monday evening and Tuesday mornings gospel readings. The theme of readiness for the final judgement runs through the readings and the parables of the 10 talents and the 10 virgins are told. The sheep and goats (from the crocodile hunter's stash) are a reference to the scripture in which the people will be divided at judgement. The coin recalls the story of the Pharisees' attempt to trick Christ - render unto Caesar that which is Caesar's. I still want to include a lamp, perhaps made from sculpy, to represent the parable of the 10 virgins, but that may have to wait until next year. 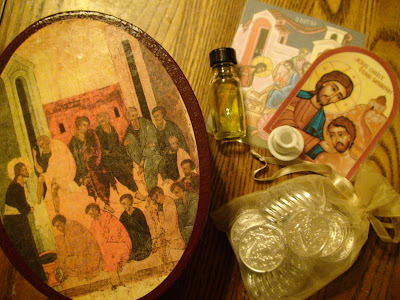 Box 4: This box covers Tuesday evening through Wednesday evening, with an emphasis on healing. The scriptures read during these days recalls the parable of the good Samaritan, and references to Christ healing the sick. The pitcher, basin (doll house items) and vial of oil remind us of the harlot washing Christ's feet, and also His rebuke to the disciples that He came to save those who are sinful. The bag contains 30 pieces of silver, as Wednesday is also the day Judas is paid for his betrayal of Christ. Finally, the oil also calls to mind the Service of Holy Unction which is commonly held on Wednesday of Holy Week. 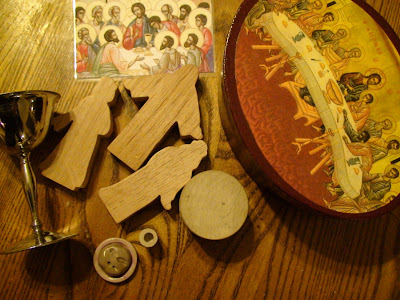 Box 5: This box is for the Mystical Supper, and contains a chalice, bread, an icon of the last supper and figures of Christ and disciples. 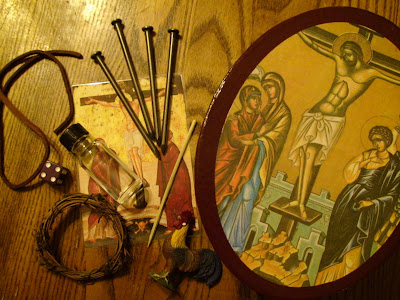 Box 6: This box covers the services of Thursday and Friday, from the Passion Gospel service to Royal Hours on Friday. It contains a small plastic sword (not shown - you know, one of those cocktail ones !) which Peter drew to defend Christ in the garden, a rooster as a reminder of Peter's betrayal hours later, a crown of thorns (miniature wreath from H*bby L*bby), a vial of vinegar as offered to Christ on the cross, a strip of leather to remind of the beating he received, a die as they cast lots for his clothing, and a small wooden skewer to represent the spear that pierced His side. 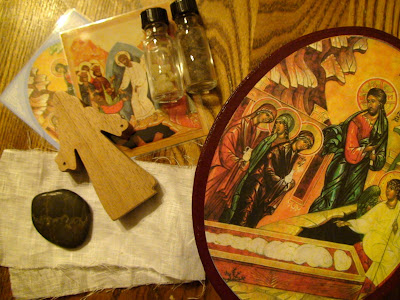 Box 7: The final box is for Saturday, and contains a strip of linen to represent Christ's burial, vials of frankincense and myrrh which the women took to the tomb to prepare his body, a stone, icons of the resurrection and the risen Christ figure.

Some of the items in the boxes are not appropriate for younger children, and I am sure there are many other items that could be included, and ways to personalize this project. We plan to take each box to church during those services, and use the items as reminders for what the kids should be listening for during the readings. As I said, I did not have this ready last year, but I did collect a few items to use last year, and it was amazing how effective it was for my 4 year old to hold those grapes, and then how excited she was when she actually heard the parable of the vineyard. If nothing else, it tuned them in to the readings, and gave them something visual to contemplate throughout some VERY LONG services that test the patience of even the most tolerant of children!
Posted by Anna at 2:37 PM

This is amazing - I love this idea!

These are inspiring and beautiful!

They are beautiful!! You must have a little girl who is 4 because I have all boys and those grapes would have been all plucked off in 2 seconds and used for chew toys and little bombs to be thrown at other siblings during liturgy. What a boy can't think of, they are all movement.

thank you for sharing your ideas with us so generously! What a beautiful idea to make hOly Week come alive for the children!

This looks a lot like how I teach my Sunday school class during Great Lent. And the children love it. Your storage boxes are beautiful!

Leah - I would love to be a student in one of your sunday school classes, I can only imagine how much fun the kids must have - with all of your beautiful figures and creations!

As someone who sat behind your family a couple of times during Holy Week last year, I can tell you these are brilliant and that I was wishing you were my mommy. :) This is a beautiful idea. Thank you for sharing it so generously with others.s Makes me wish my children were still small enough to do this with them. But someday there will be grandchildren....

Awesome idea! I took it and ran with it. I'm doing a set of Holy Week boxes, and I'm also doing the Twelve Major Feasts. I made the first one for Annunciation. I wrote about it on my blog:

Thanks again for this wonderful idea. I'm continuing with it throughout the Church year.

I started a new blog, and I just posted yesterday about the box we made for Pentecost.