We interrupt this program ...

A brief departure from our Irish travels, but I wanted to share a few images from last evening. I don't consider myself a fan of modern art, as most modern art reflects a rejection of order and beauty and therefore God,  but this exhibit took my breathe away.  Some of it was whimsical, some of it was crazy, but all of it was beautiful, and rather than acting as a dissonant ring against God's creation, these works melded into a beautiful complement to and reflection of the nature we were walking through. 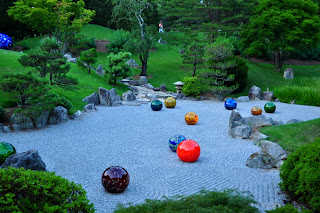 Marbles, anyone?  I have visions of Narnian giants attempting a game as Reepicheep looks on, shouting instructions from the sidelines :) 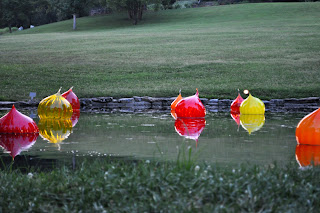 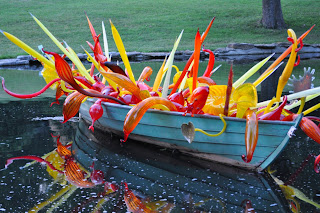 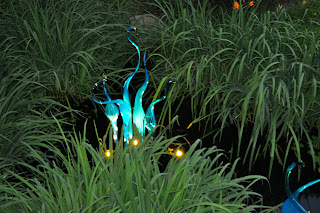 The most spectacular views were as the sun set, and as the last rays of the sun died in the sky, so did my camera battery!  So, unfortunately the photo above is the only one I got which captured some of the beauty of these glass sculptures up against the dark night.
Posted by Anna at 10:09 PM

those are so beautiful.

I love Dale Chihuly! I first was introduced to his work by my priest when I was in college. Now, for over 15 years I've been seeking out his installations and have seen them in at least four states. Simply breathtaking!

And be careful - "modern" art grows on you. (smile) After several semesters of teaching Russian art history, I'm pretty enamored with many modern artists - Chagall, Kandinsky and others.

That is a beautiful exhibit.

love your other posts too w. Celtic Saints. fun!