The Life of St. Paul of Thebes 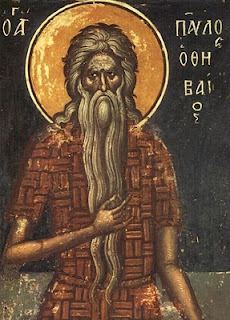 In the third century, when St. Anthony the Great was living in the deserts of Egypt, one day the thought came to him that he was the most holy man of the desert, having given his life to prayer longer than any other.  It was then that he had a vision, and it was revealed by the Holy Spirit that there was another who had dedicated his life to prayer in the desert many years before Anthony.  With nothing but the guidance of the Holy Spirit, St. Anthony began to walk out into the desert, searching for this man.  For three days he walked, and on the third day, a small cave appeared ahead of him.  Upon reaching the cave, St. Paul, wearing a garment woven of palm leaves, greeted him by name, and asked him to come and sit talk with him.  While the two talked, a raven appeared, bearing a loaf of bread.  St. Paul marvelled, saying, "for 70 years a raven has provided me with half a loaf of bread each day, today the Lord has provided for both me and my guest."   St. Paul, orphaned at the age of 16, had fled the persecutions of the Roman Emperor and come to the desert to pray.  He and Anthony talked all day, and as the day drew to a close, Paul asked Anthony to go and retrieve the tunic that had been presented to Bishop Athanasius, that Paul's body might be wrapped in it and laid to rest, for he knew his time was near.  Anthony, saddened at the thought of losing this man he had only just met, dared not argue at Paul's request, recognizing the impossible knowledge of this man to be from God.  Anthony journeyed back to his monastery without rest, retrieved the cloak, and without stopping to explain to his fellow monastic brothers, made the journey back to St. Paul.  As he travelled, he witnessed the soul of Paul arising to heaven.  When he arrived, he found his beloved friend kneeling.  Thinking he was in prayer, St. Anthony joined him, until many hours later when he realized his soul had indeed departed yet his body remained a servant of God.  Anthony, hoping to fulfill St. Paul's wish for burial, looked around, and realized the ground was far to hard for him to dig a grave.  He knelt by the body of St. Paul and resigned himself to remaining there until someone came, or Anthony himself perished from the vigil.  It was then that two lions approached.  The lions began to claw at the earth, digging a grave for the saint.  When the hole was dug, Anthony reverently wrapped the body of Paul in the cloak, and buried him. 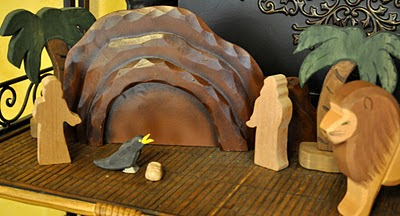 Thanks to each of you who were brave enough to offer a guess :)  Only two people had the correct answer, the winner of the Children's Bible Reader is Jelena.  Congratulations!  Leave me a comment with your email and I will contact you about shipping your book.
Posted by Anna at 12:05 AM

Labels: lives of the saints

Dear Anna,
Thank you so much for this wonderful Gift.My three little ones will cherish this book.
Thank you for finding time and love to create such a beautiful blog.Have a Blessed Lent!
With Love in Christ,
Jelena(yuyeca97@aol.com)
http://www.flickr.com/photos/jelenaammari/

I love to hear about the lives of the saints. Thank you.