This was not my idea, and in fact I think I got it from Mary's previous blog a few years ago, but since you can't see it there, I am going to share my version here. This is a simple idea that offers a variety of sound related possibilities. I purchased mini tote bags from Hobby Lobby (on sale of course :). I got red ones for vowels, yellow for the letter "y", green ones for "c", "g" and "s" since they are the consonants with more than one sound, and the rest of the consonants are in the natural color (that color was the cheapest). I also got blue bags for some of the multi-letter phonograms such as "ch" and "sh" (not pictured). 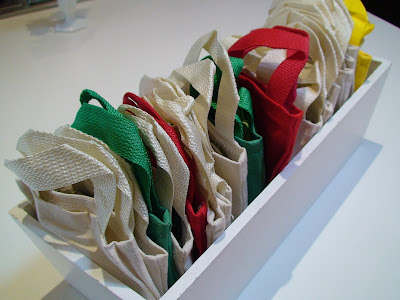 On one side of each bag I wrote the lowercase letter, and then on the other side the uppercase letter using a permanent marker. Inside each bag is a set of texture cards for that letter, and a selection of wooden die-cuts that begin with the corresponding letter. These can be purchased for anywhere from 25-50 cents at craft and hobby stores. You could also just collect small toys or objects you already own. I slowly accumulated the little figures over a period of a few months until I had 2-6 per bag (some letters are harder than others :) 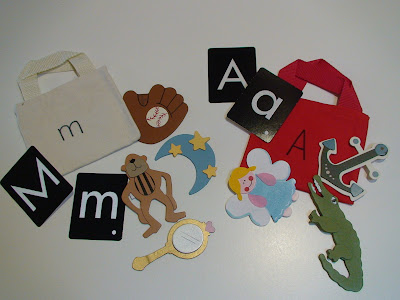 The Queen will get a new bag with each letter, and in the beginning will just have fun with them. Once several letters have been introduced she will be able to use them for sorting activities.
Posted by Anna at 8:01 AM

I have really loved these bags and look forward to using them with Gregory next year. I'm glad you posted about them since the Onion Dome post was mostly photos and the text I have archived isn't very helpful to anyone.

How smart you are to simply write the letter on the bag. I spent a whole afternoon ironing on the letters. Sometimes I make things just too difficult for myself.

I really like this. We used magnet letters and a white board the first time around. But this looks like so much more fun. And I could do it now at age 4. I might have a trip to Hobby Lobby in my future.